The Apprentice episode 2 logos - our thoughts 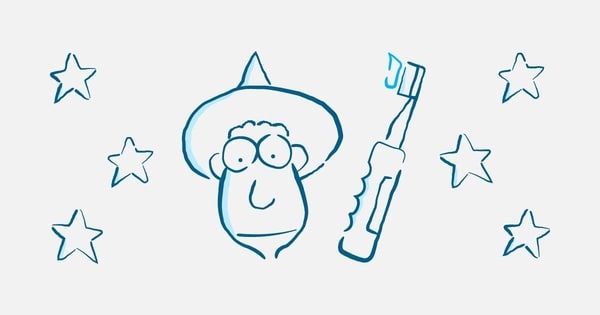 The Apprentice is back and we are loving it so far. Creating a brand quickly is a challenge. We create logos daily for a diverse range of customers. Having a great logo for your brand can make a significant difference to your business. After watching the first couple of episodes it got us thinking, what would we have done in a short time frame?

In this blog post, we'll look at the logos from The Apprentice Series 16, episode 2 and give the pros and cons of each design. Finally, we'll design our own take on what we would do in a brief time frame.

The boys' team came up with the concept of Wizardy Brush. During the planning stage, the idea was to create a magic wand brush with an app targeted at both boys and girls. The children could then use this wand to create magic spells within the app.

When it came to the design side of the task, things didn't go to plan. The target market changed from both genders to boys. The design of the toothbrush itself didn't quite look like a wand, but it certainly looked at home in the bathroom! 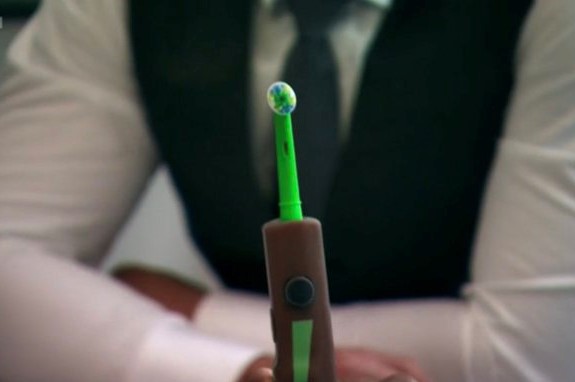 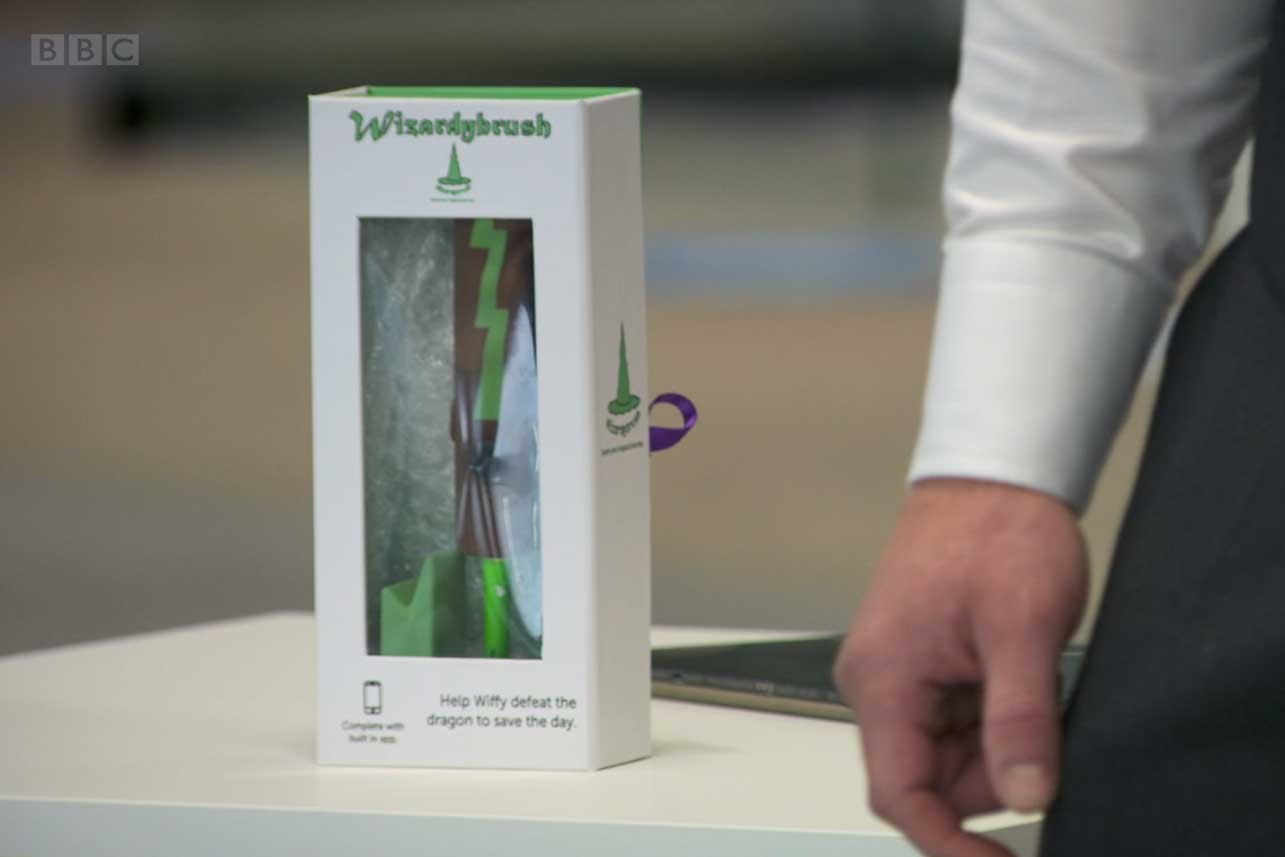 For the logo design, the team chose a decorative font. Decorative fonts are quite illustrative in appearance and don't fall under the usual categories. The font looked like text chiselled or carved into wood. For the colour scheme, they went for their signature brown and green. For the icon, they chose a wizard/witch's hat. Underneath the hat the brand name is repeated.

This week's logo was a big improvement on last weeks. The pros and cons for the logo design are outlined below:

Text - For the text, as mentioned above, they used a decorative font. The idea to use a decorative font for children marketed products is a good one. Decorative fonts can be fun, friendly, and expressive. The use of the decorative font in this instance isn't quite hitting the mark. Rather than focusing on the magical aspect of the toothbrush concept, they focus on the wand. The font style was 'wood' styled but the colour didn't reflect this.

Colour - For the target market and brief, brown and green is not an appealing colour scheme. The team used brown as it was the colour of a wand. The idea to use brown was an informed choice but overall wasn't executed well. All colours have positive connotations when used correctly. How you pair them can change their meaning and give negative connotations. Brown is associated with the earth and ground. Yes, it does represent the wand but it's associated with dirt and waste. The brown paired with green makes you think of toxicity/toxic waste and not magical wizardry. The colour pairing itself isn't very eye catching for the target market of 6-8 year olds.

Icon - The icon chosen is suitable. The hat represents a witch or wizard. However, its use was quite poor. The icon itself didn't add to the design and didn't look like it was connected to it. The positioning isn't great and throws the logo off balance. If the hat were positioned to the side or above, it would look more balanced.

Tagline - The team didn't have a tagline. Instead, they repeated the brand name. This step was unnecessary and didn't add anything to the communication aspect of the logo. 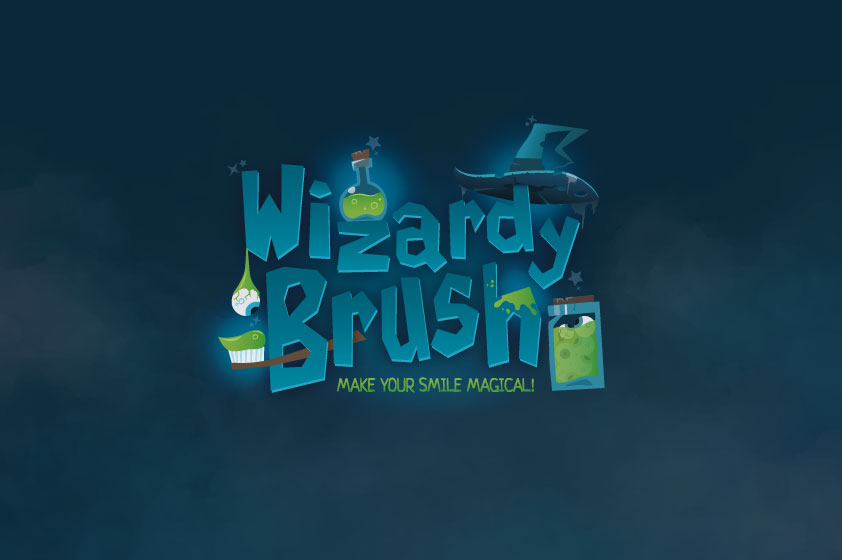 For our quick take on the Wizardy Brush logo from the brief, the brand name is in a clear decorative font. The colour scheme is a mixture of dark blues and lime green. The icons include witch's/wizard hat, toothbrush, potion bottles and an eye. We've also added a tagline to help anchor the meaning of the brand.

Using a decorative font adds a childlike playfulness to the design. We've made sure that it is easily readable for its target audience of 6-8 year olds. The font looks a bit like stone which gives spooky connotations. The colours of the logo (blue and greens) relate to the magical/mystical aspect of the design. The contrast of the colours and the vividness of the green is eye-catching. The icons give connotations of the product itself. The toothbrush and toothpaste help you instantly recognise that it's a tooth brush related product. The potions and the eyes give connotations of magical recipes.

The girls team came up with the concept of Brushing Star. During the planning stage, the idea was to create a space theme brush and app that was gender neutral. The children would use the brush to earn items for their planets. 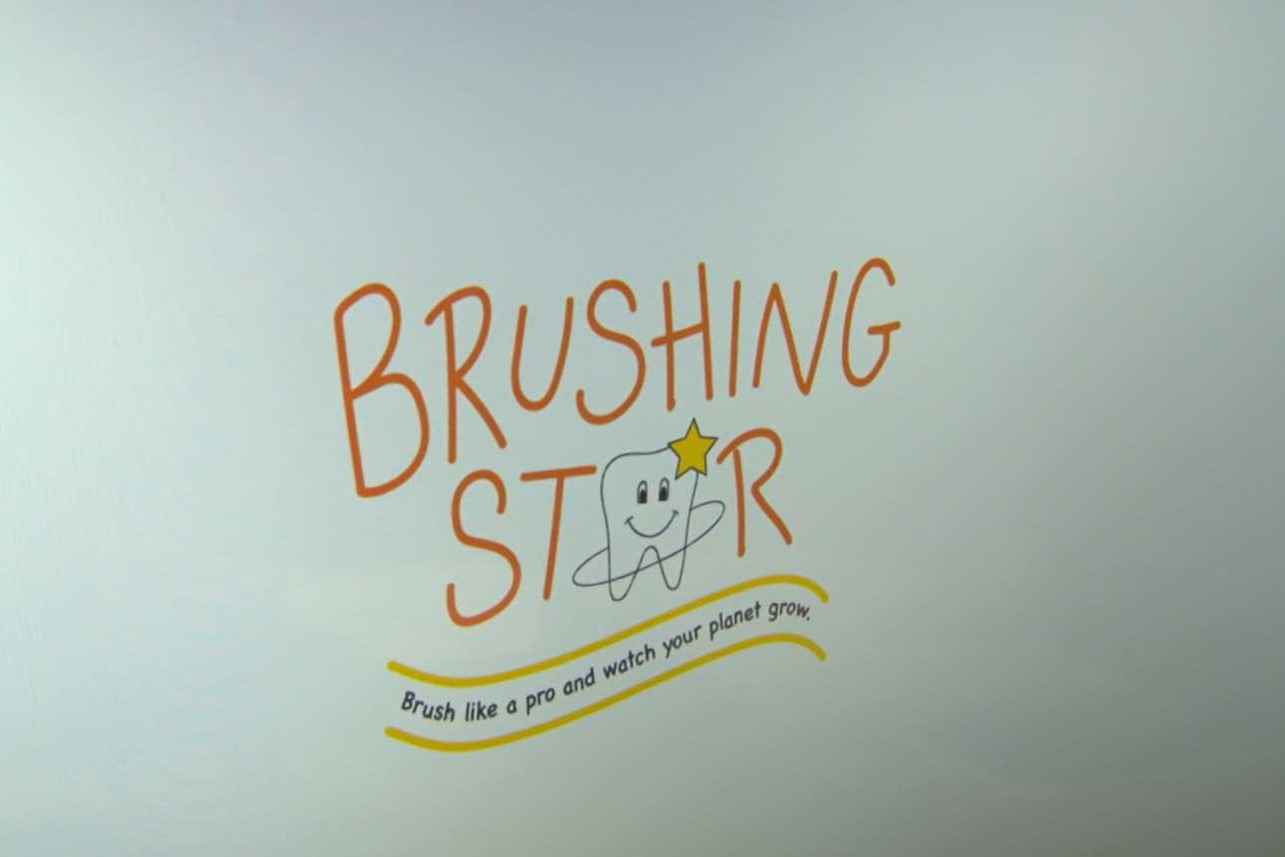 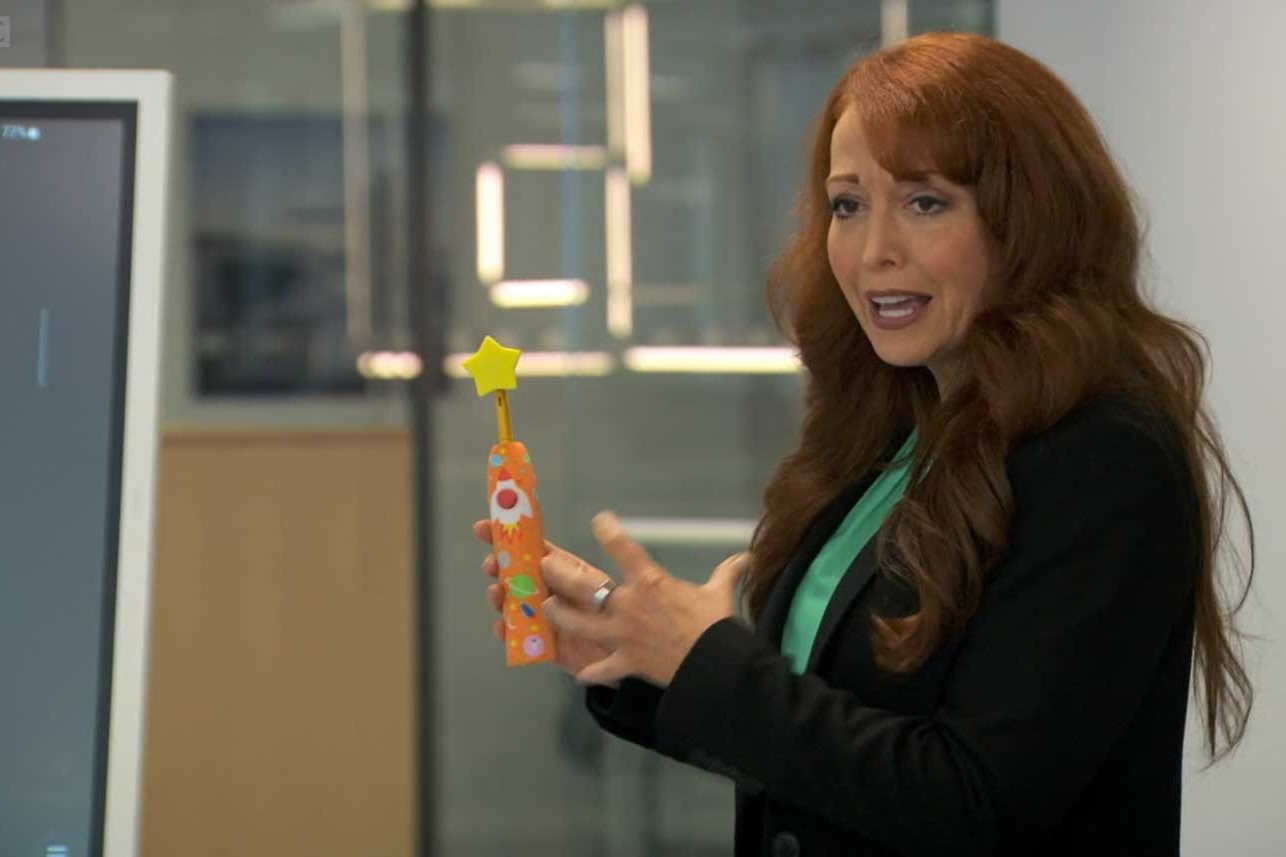 For the logo design, the team chose a hand drawn font. Hand drawn fonts are great for making things look like they are written or created by hand. For the colour scheme, they went for muted shade of yellow and orange. For the icon, they chose a smiling tooth incorporated into the logo text. They also had a tagline below.

The girls' team included all the right things, but weren't quite hitting the target market. The pros and cons for the logo design are outlined below:

Text - The use of a hand drawn font made the logo seem like it was aimed at a younger audience. The feedback given in the show expressed that the logo looked 'babyish'. The font paired with the colour scheme made the product look like it was marketed towards 0-3 year olds. There are no allusions towards the space aspect within the font.

Colour - For the target market, the orange and yellow colours are gender neutral. The colour scheme is quite soft and muted which is more suited to a younger audience; however, the colour scheme chosen doesn't reflect space. When you think of space, you think of high contrast vibrant colours - this wasn't reflected in the logo design.

Icon - The idea for the icon is there. They have all the elements associated with the product, a tooth, star and a planet ring, however it is executed poorly. The thin outline design of the tooth looks quite cheap and clinical. Electric toothbrushes are expensive: you would want to reflect that quality. It's simple design style that also looks hand drawn which seems more suited to a younger audience.

Tagline - The girls' team logo included a tagline which is a plus point. Taglines are really useful and are used for anchorage. This means they help solidify the meaning of your icon and the text of your logo. The tagline reads: 'Brush like a pro and watch your planet grow'. This is a good tagline and really helps the viewer understand what the product does. It's also quite catchy! 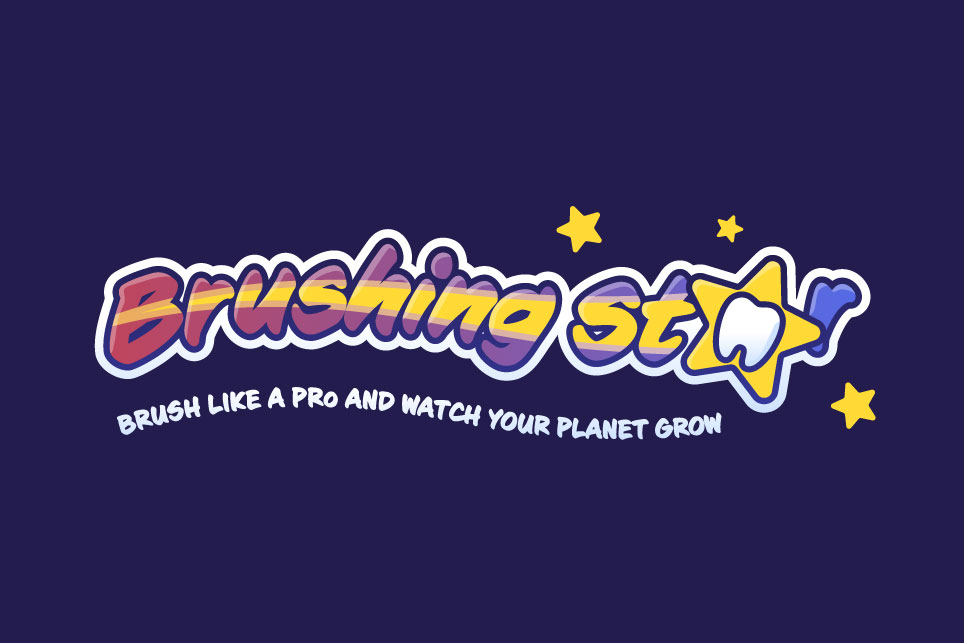 For our quick take on Brushing Star's logo from the brief, the brand name is in a decorative font. The colour scheme is a mixture of spacy blues, purples, yellow and red. The icon is designed into the text as the 'A'. The icon is a star and tooth combined. A tagline is below the logo.

Using a decorative font adds a playfulness to the logo. The font style is young but doesn't look too childish to appeal to 6-8 year olds. The thick rounded features of the font with the slight shine effect gives the impression it could have been written in toothpaste. The colour scheme tones are cosmic in colour giving connotations of space. The wave of colour leading to the star adds movement creating more interest. This, again, emphasises the fun element trying to encourage children to brush their teeth. The star icon with a tooth shape gives connotations of space and teeth. The icon itself is in the text design but can also work well as a standalone mark.

To learn more about logo design and how to create the perfect logo for your business, check out our article here.

If you have found this article useful and informative, please share it below :-)